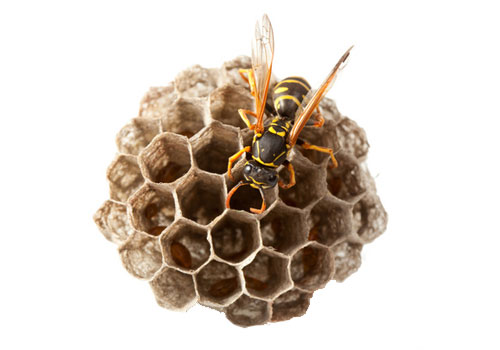 In Australia there are approximately 35 species referred to as paper wasps. They all build paper nests but the size and shape varies considerably. The ones typically found in the Ipswich and Brisbane areas include;

The Paper wasp is not a destructive insect to people’s homes. Their nest is not invasive and does not cause significant noticeable damage to the structure or walls.

Wasps are the natural enemy of caterpillers and other garden pests and are therefore beneficial.

The main problem is when humans disturb a wasp nest these insects can inflict a painful sting. Unlike bees, wasps can sting repeatedly.

Symptoms of a sting

The sting is associated with a burning pain around a raised red lump on the skin where the sting was perpetrated. Some people can suffer an allergic reaction to the wasp sting. This reaction can be potentially serious if the stings are experienced near the air ways of the person.

The wasp venom does contain certain toxins that cause allergic reactions in around 1 out of every 10 people. If a person is stung and suffers a severe reaction to the toxins (anaphylaxis), symptoms may include;

– Swelling of the air way around the mouth, lips, tongue and throat
– Strained breathing
– Noisy and laboured breathing
– Difficulty swallowing
– Tightness in the upper chest area
– Increased heart rate and racing of the pulse
– Weakness and dizziness
– Young children or the elderly may be come unconscious or exhibit signs of lethargy and floppy limbs

Avoid disturbing any wasp nest. Nests attached to buildings are generally quite noticeable and often inaccessable. (Under the eaves or gutters)

A Nest atached to garden trees and plants may not be noticeable until it has been disturbed inadvertantly. Wasps will not hesitate to become aggressive and over protective of their nest and attack humans that come near to their nest.

The attacking wasp sprays a chemical pheromone scent onto the person who threatened the nest. Other wasps to attack the same person.

The Paper wasp can sting repeatedly.